Farmers around the world take advantage of the benefits agricultural biotechnology offers to their farming operations. According to a recent report by the International Service for the Acquisition of Agri-biotech Applications (ISAAA), 18 million farmers in 27 countries plant biotech crops.

Here are what a few Australian farmers have to say about their experience farming genetically modified crops. 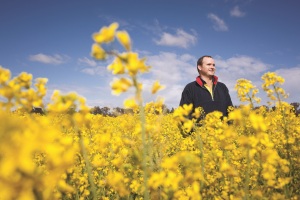 “I have strict processes in place, as I’m growing both GM and non-GM canola at the same time, and have never had any issues with segregation. We make it really clear to our contractors when they arrive and the machinery is cleaned down properly in between paddocks. Our silos also get cleaned thoroughly, but being fastidious is just good management anyway. GM plants that shoot up between crops are no harder to deal with than non-GM plants bred to be herbicide tolerant.” Business Overview: Jemma runs Danubin Farm near Wongan Hills in Western Australia in partnership with her brother and father. They crop around 4,800 hectares with wheat, canola, barley and lupins, and run 3,000 ewes on 1,000 hectares.

“We’ve been rapidly running out of options for weed control in WA, with wild radish and rye grass almost impossible to kill in-crop. Dry starts to the season are becoming more common, with no weeds germinating before seeding, so we often don’t get to use glyphosate as a knockdown herbicide. With GM canola, we now have a viable break crop and one which allows us to spray weeds at the most effective time. However, it’s important that we use this tool wisely, in rotation with other weed management strategies, to avoid the onset of glyphosate resistance.” Business Overview: John and his wife Rosalen farm Kintyre, 800 hectares on Queensland’s Darling Downs, approximately 60 kilometres west of Toowoomba. They grow predominately dryland cotton with some sorghum in summer and wheat in winter.

“GM has given us the social licence to continue to produce cotton. In the early 1990s, we had to use up to 12 applications of insecticide on each crop. With the GM varieties we use today, we’re down to maybe one or two and the natural environment is far healthier. I think we would have been driven out of business because of community concern about levels of insecticide use without GM.”